Dive the Chandelier Cave in Palau

Are you ready for your next dive adventure?

Then you shouldn't miss out on one of our famous dive sites here in Palau - the Chandelier Cave. The cave is hidden in one of the rock islands, just 5 minutes away from Fish ’n Fins dive shop, an affiliate of Ocean Hunter Liveaboards Palau. The entrance is shallow (around 4 m/12 feet) and therefore easily accessible. What makes this cave so special are the 4 chambers, each filled with an air pocket. During the dive, we will explore the cave and ascend to each chamber's surface. The ceiling is full of stunning stalactites. You can even take out your regulator and

present your prettiest smile to the cameras. On the way out we will follow the ambient light, coming from the exit - it's an absolute highlight and definitely a dive to remember! The Chandelier cave is an easy cave dive. Even for those who haven't done any cave diving yet. Proper buoyancy control is required though. (Anja Bittner, PADI Instructor)

So get your flashlights ready and let's go! 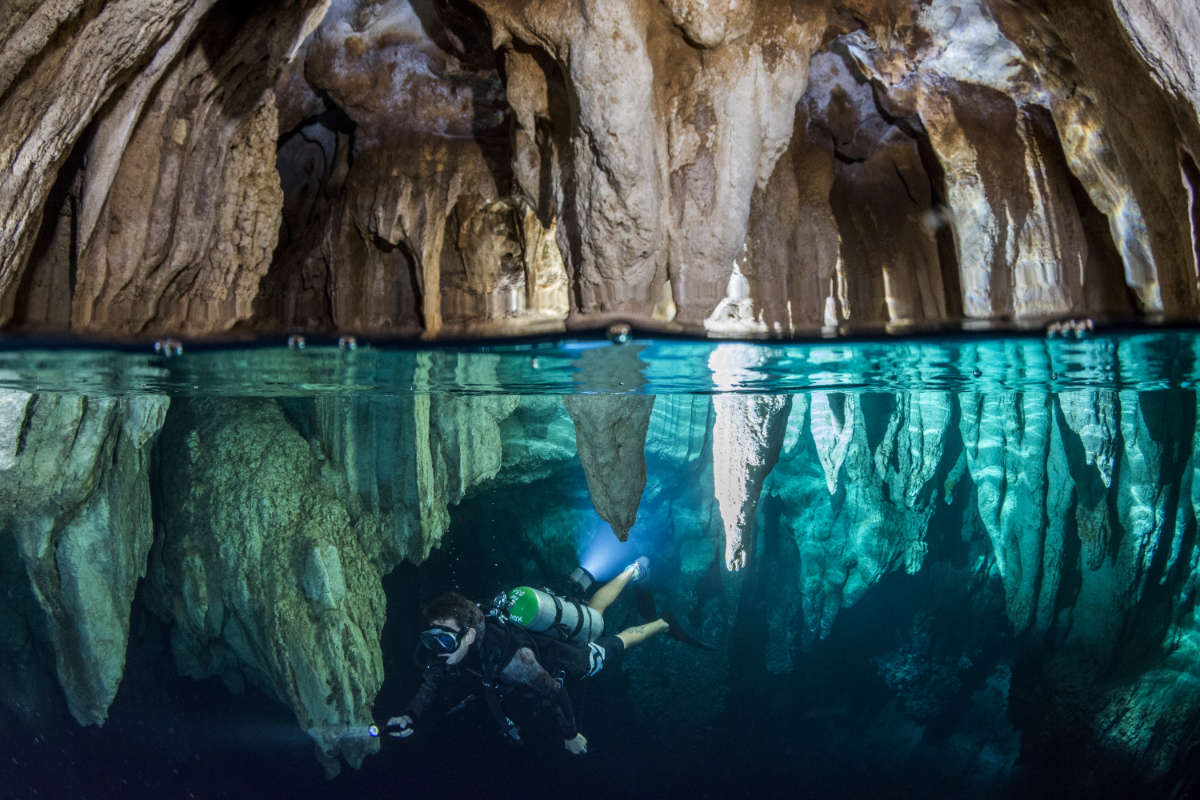 There are numerous stories of how the Chandelier Cave was first discovered. The most believable story goes back to the post-WWII era. Ordinance teams were combing the island looking for unexploded bombs and ammunition. The team found three (3) depth charges, they can still be seen to the left of the entrance. These are the same type and shape that can be found on the Helmet Wreck. While trying to remove the depth charges the entrance to the cave was discovered. Another story tells of a fisherman, who was out catching dinner one day. The fisherman saw a large fish and tried to catch it, but the fish swam toward the island and disappeared into the entrance to the cave. 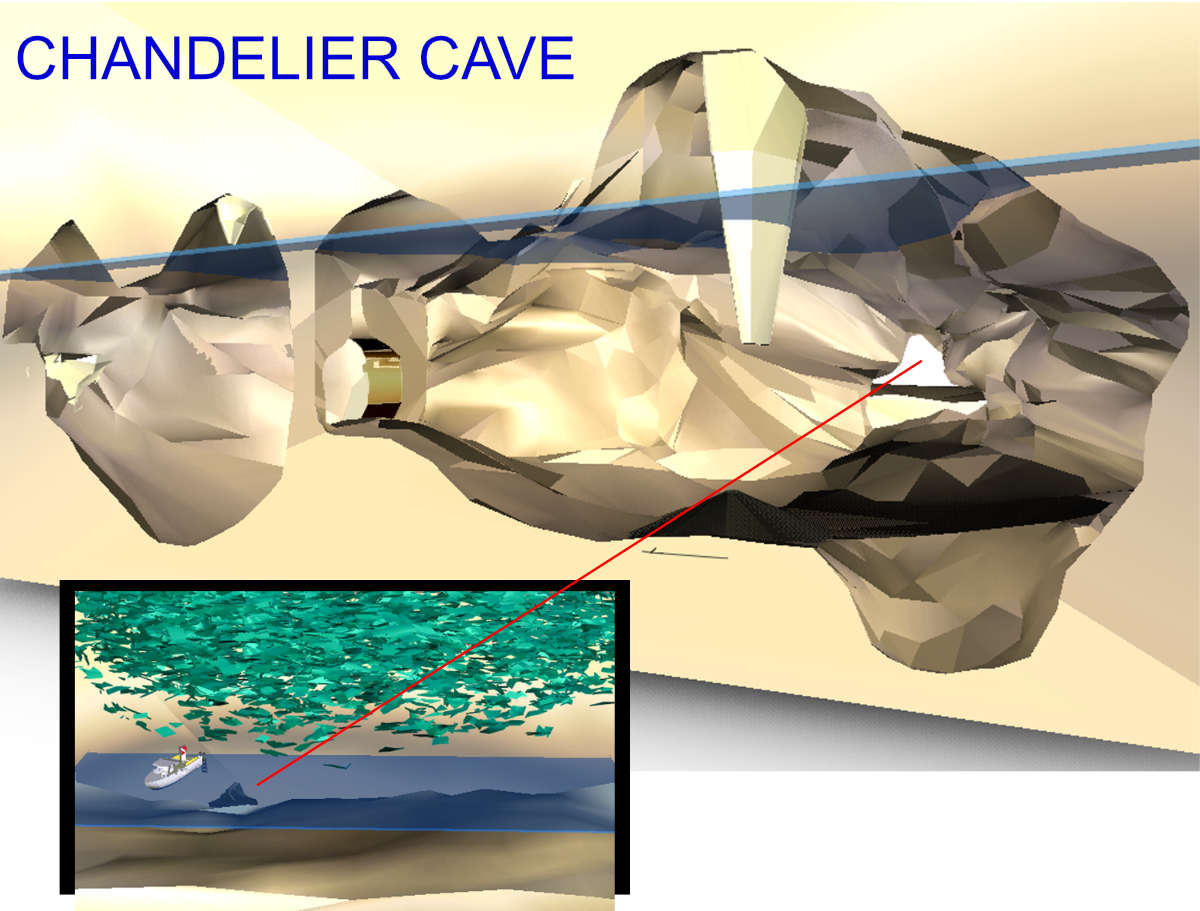 The entrance to the cave is through a 10-foot (3 meters) diameter opening in the rock island approximately 12 feet (4 meters) from the surface. Underwater lights are a must and the brighter the better. The bottom of the cave is sand and silt that can easily be disturbed. Do your best to stay off the bottom. As you enter the cave system, the first thing you can see is darkness followed by even more darkness. If you look back toward the entrance, you will see a bluish light; this light is visible no matter where you are in the cave system. As you enter the first chamber and your eyes adapt, you will start to make out the shapes that appear to be hanging magically from the water surface. These will emerge as enormous stalactites hanging down into the water. Start your ascent slowly, with one arm raised above your head so you do not accidentally hit one of the stalactites and damage it (or your head). In the first chamber, as you shine your light above, you can see the marvelous colors and shapes that nature has provided. From here you can work your way on into the other 4 chambers. If you want to enter the 5th chamber you will have to remove your dive gear. Be forewarned, you will have to crawl and slide through some very tight places lined with slippery black mud, but the reward will be worth the trip. While still in the cave system it is fun to turn off all dive lights; you will begin to understand the real meaning of black. In a few minutes, the light from the cave entrance will become visible and soon you will see an eerie green glow. Take time to re-explore each chamber, with your eyes adjusted to the dark everything will look a little bit different. 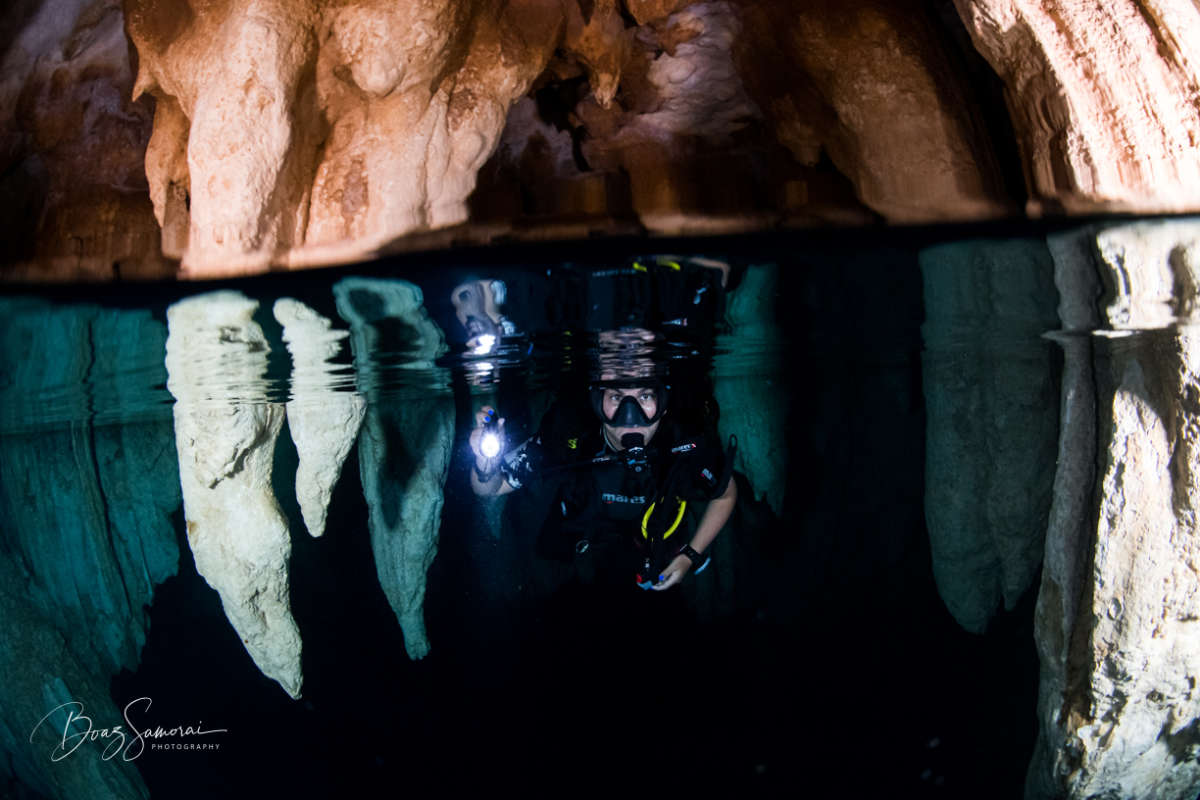 Chandelier Cave is a cave system made up of five (5) separate chambers. Each chamber is connected to the other and each can be entered. Important Notice: Divers, who are claustrophobic and/or have concerns about caves or diving in darkness, should avoid this dive.

The mushroom-shaped rock islands of Palau were formed from limestone reefs pushed upwards, in ancient times, by underlying volcanic activity. The islands get their distinctive shape from wave and tidal action as well as that from invertebrates scraping away tiny bits of the island as they graze on algae. Over the millennia rainwater, percolating down through the limestone eroded the interior of the islands forming, in some cases, vast cave systems. At one time, Chandelier Cave was an open-air cave, not water-filled as it is today. Over time, the stalactites (limestone pinnacles hanging from the ceiling) and stalagmites (limestone pinnacles growing from the floor) slowly grew into magnificent formations resembling priceless glittering chandeliers. After the last ice age, the water level slowly rose, completely concealing the cave's entrance. The cave is comprised of five (5) chambers, four (4) are water-filled chambers (each with an air pocket) and the fifth is completely above water and connected to the last two water chambers. 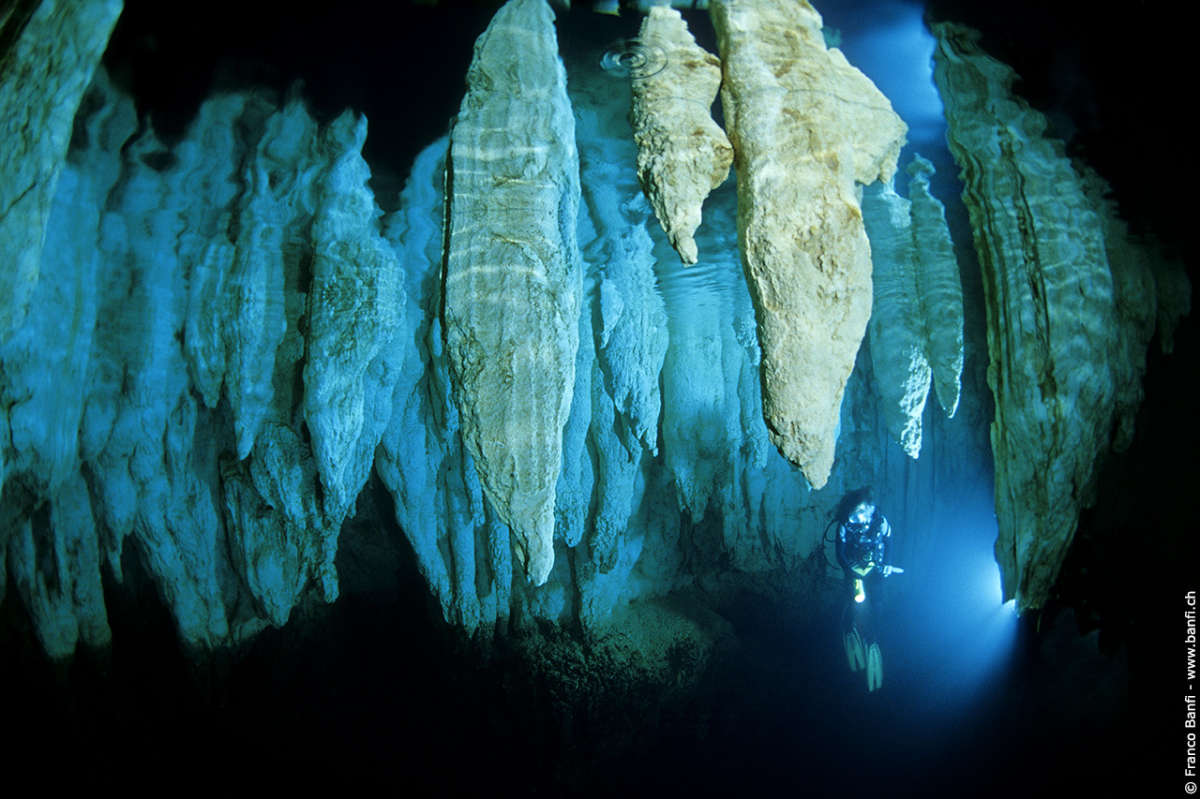 Location and Distance from Koror

Chandelier Cave is located in Malakal Harbor, Palau Less than One (1) mile (1.6 kilometers) from most dive shops in Koror.

Excellent visibility if the bottom is undisturbed. The entrance to the cave is 12 feet (4 meters) from the surface to the top of the entrance. The bottom is 36 feet (12 meters), there is no current inside the cave.

Look for soldierfish and cardinal fish hanging around the opening to the cave as well as small shrimp and crabs that cling to the sponges found along the walls. The elusive Mandarin Fish, found only in a few locations, can also reward the patient diver. 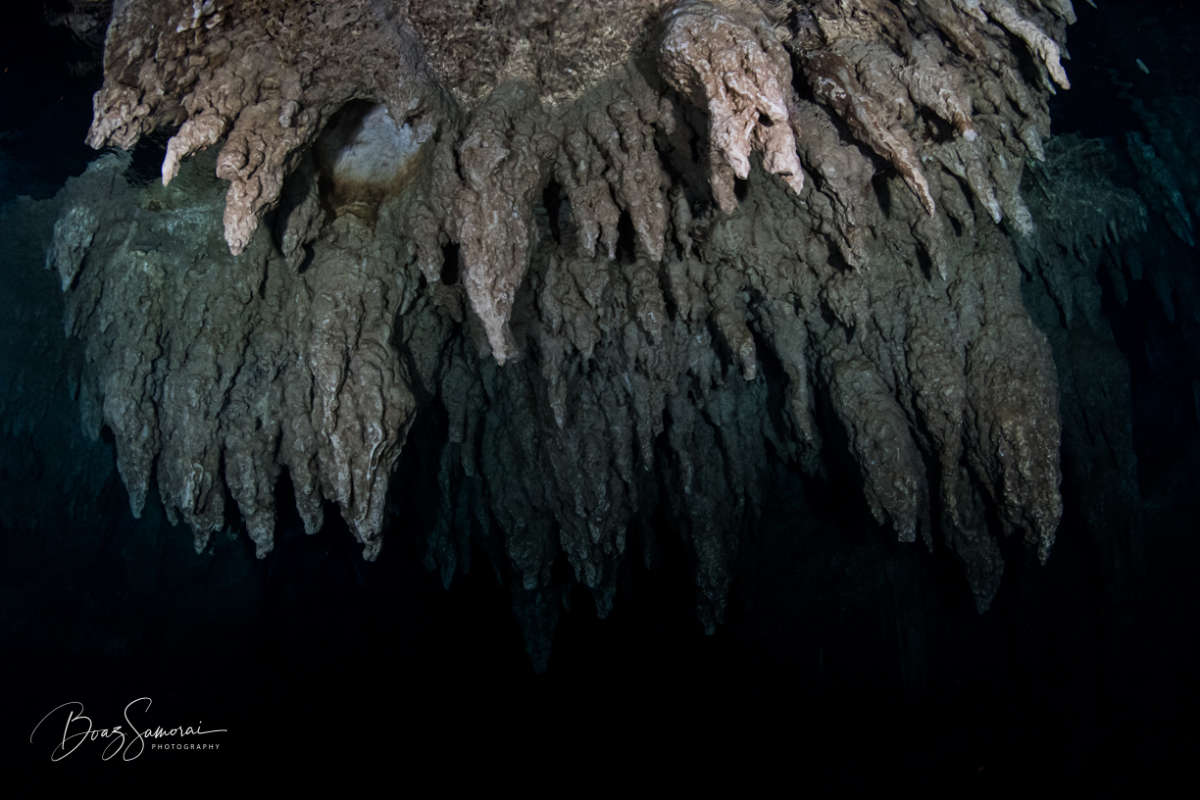 The Chandelier Cave in Palau is a perfect cave dive for all divers who wish to try cave diving and need a bit more space. Chandelier Cave Palau invites you to surface in one of the air pockets to shine your underwater light onto the cave’s stalactites. All in all a shallow easy dive, which you’ll enjoy a lot!