Diving the wreck of the Iro from Palau's Premium Liveaboard

The Wreck of the Iro in Palau, my favorite dive

Alii and sunny greetings from Palau! My name is Anja Bittner, I am a PADI dive instructor, working for Fish ’n Fins here in Palau. I am from Germany. I first came to visit Palau for a dive vacation in 2018. Enchanted by the breathtaking underwater world and the hospitality of the Palauan people I decided to move to Palau only one year later and to turn my passion of scuba diving into my profession. The wreck of the Iro is one of my favorite dives, which is why I’d love to tell you more about this stunning wreck dive, before you dive into the detailed dive site description, which Navot & Tova Bornovski, the directors of Fish 'n Fins & Ocean Hunter Liveaboards Palau, have created.

Most of us know the WWII history only from books and TV documentaries. But here in Palau WWII history comes alive and you have the opportunity to visit many historical sites, on land and underwater. Palau offers over 30 most impressive wrecks, all in convenient depths for scuba divers. In March 1944 the Iro was on its way from the Philippines to Palau. It got hit by a torpedo from a US submarine, but did not sink. It reached Palau ready for repair but it finally sunk after getting hit by a bomb during the 'Operation Desecrate One' airstrikes. With this story in mind I usually descend with my guests from the mooring line. A few meters down we see the Iro laying there - proud and majestic. We normally check the bow first with its cannon and descend then straight to the torpedo hole. Goose bumps are promised! We then explore the deck in a zig-zag pattern on the way to the stern. The whole dive starts to get even more mystical when we pass the impressive masts and see them appear in a little murky waters. If we are still within our dive profile’s limit we usually visit the engine room, before we ascend to our safety stop on the Iro’s last mast, where we enjoy dense populations of anemones and clown fish on the mast. You’ll see, it’s a stunning wreck dive. (Anja Bittner, PADI Dive Instructor) 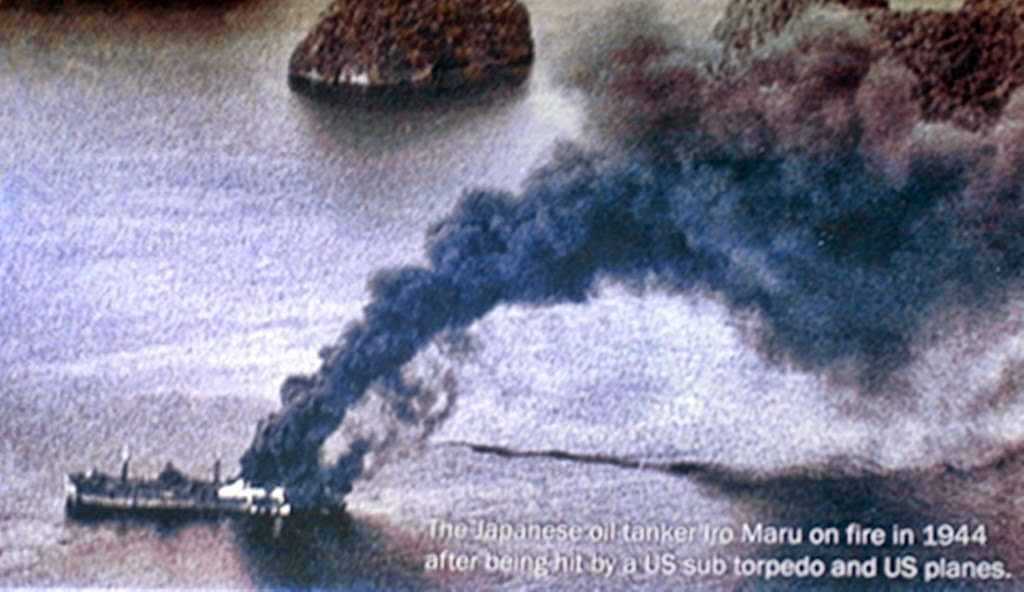 History of the Iro Wreck in Palau

The Iro and her sister ship, the Sata, sank during Operation DESECRATE ONE within 300 yards from each other in the Urukthapel anchorage. Ever since their discovery, numerous efforts have been made to identify which ship is which. Underwater it is easy to tell one ship from the other, one sits upright and the other has capsized. For the sake of continuity, we will follow Dan Bailey's identification and will refer to this wreck as the IRO (Klaus Lindemann, another wreck expert, identified her as the Sata). The Iro was a fleet oiler and supply ship. On March 22, 1944, on her way from the Philippines to Palau, a torpedo launched from the submarine USS Tunny hit her bow forward of the bulkheads. On March 30, 1944, she came under fire and was bombed during Operation DESECRATE ONE. A massive explosion in the engine room sent her to the bottom. 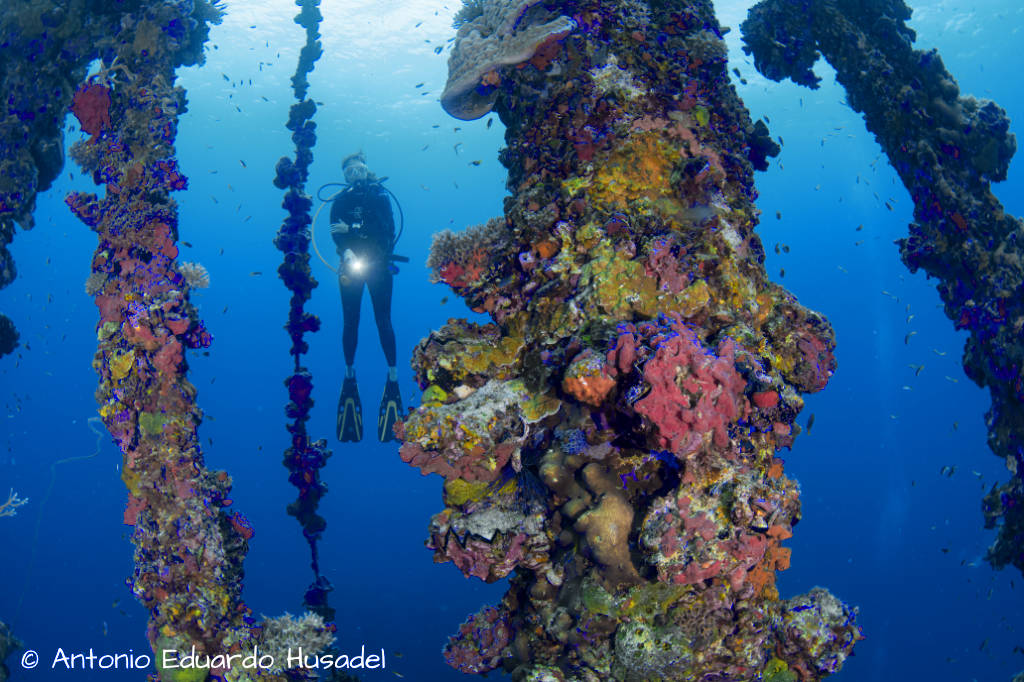 Diving the Iro is easy and enjoyable. Follow the mooring line to the forward tower and onto the huge and wide deck. The bow is pointing east. On top of the bow is a very large gun mounted on a circular platform. The gun barrel diameter is 7 inches (17.8 cm) and the length is 14 feet (4.26 meters). The gun is aiming down at a 20-degree angle and is completely encrusted with corals and marine life. If you are interested in the bow damage, follow the ship's starboard anchor chain down along the side of the ship. The port anchor is still in place. Starting at 80 feet (24.4 meters) the torpedo damage becomes visible; the hole is now covered with black coral growth. Swim up again to deck level, going aft, examine the deck, its fuel pipes, hoses hatches, and portholes. The bridge is open and easily accessible due to fire damage as a result of the bombing. The crew quarters are under the bridge; do not attempt to go through unless you are fully prepared to penetrate the ship. Further down the deck, you will reach the engine room; it is large and open. The boiler can be easily identified along with the catwalks and railings. As you near the stern another big loading tower can be seen. Past the loading tower is the aft gun. This gun is identical to the bow gun. To thoroughly explore this interesting wreck, more than one dive is needed! 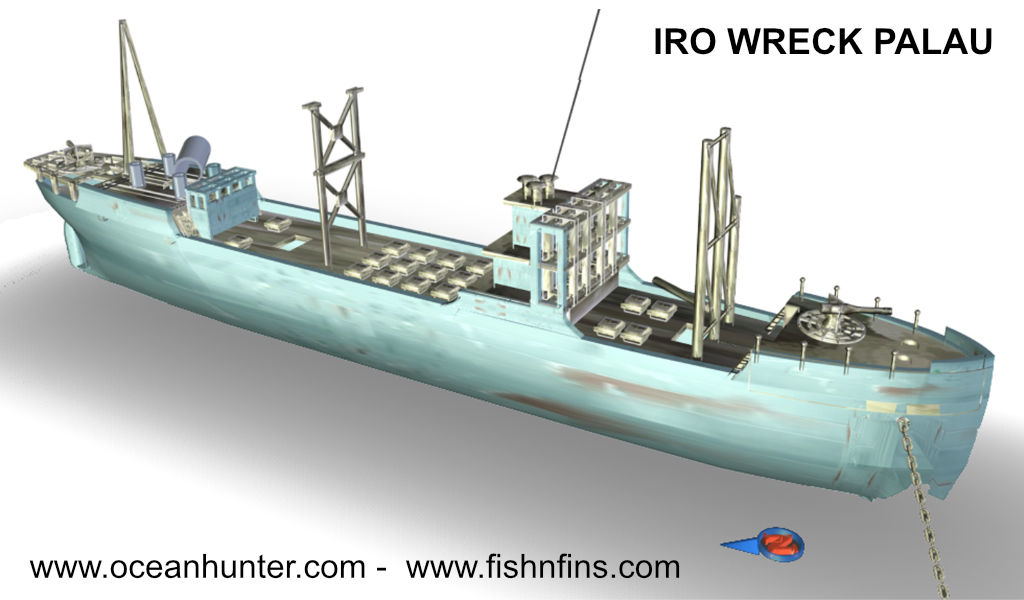 The Location of the Iro, Distance from Koror and Visibility

Distance from Koror: A 15-minute boat ride from most dive shops in Koror.

Visibility: For no apparent reason visibility on this wreck can vary from 100 feet (30.4 meters) to 30 feet (10 meters). Another unexplained phenomenon that occurs here is that the visibility on the forward half of the wreck is usually much better than the aft section.

Level of Diving Experience: Intermediate to Advanced with wreck experience mandatory if penetrating the wreck. This dive requires careful monitoring of bottom time and air consumption.

Diving Depth, Currents & General Information of the Iro in Palau

Reef Formation: There are no coral formations around the wreck. The bottom, at 120 feet (40 m), is silt. 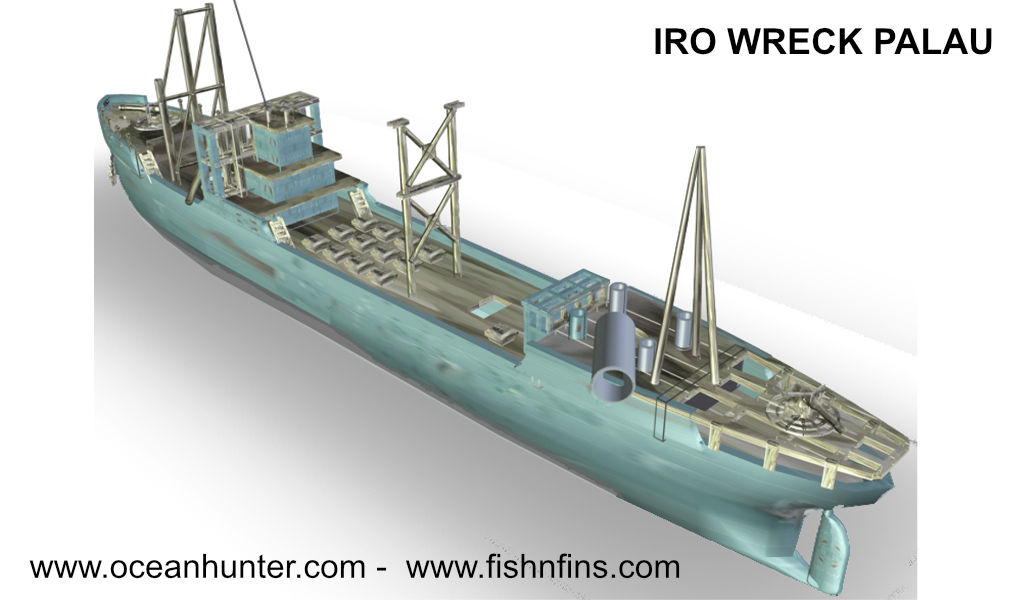 Diving: On this ship, as with all ship and plane wrecks in Palau waters, live ammunition can be found. A word of caution: DO NOT PICK UP ANY AMMUNITION!!! Due to the age of the bullets, bombs, and mortars, etc., these pieces of history are very unstable and can explode. 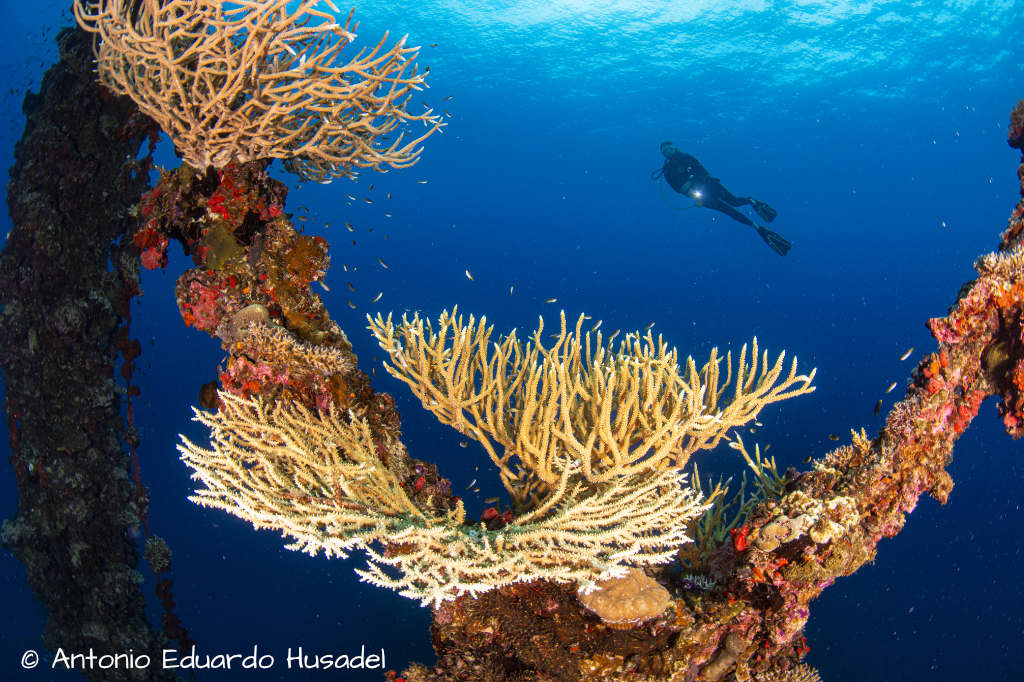 Although divers have to monitor their bottom time closely, the Iro Palau wreck dive is suitable for intermediate divers to professionals. The coral-encrusted wreck is the right choice for all wreck enthusiasts and World War II buffs. Although the wreck is in the lagoon and the view is hence rarely crystal clear, the wreck of the Iro is a paradise for underwater photographers. It’s absolutely worth diving the Iro upon your next Palau trip! In order to explore the whole wreck, you should plan more than one dive at the Wreck of the Iro in Palau. 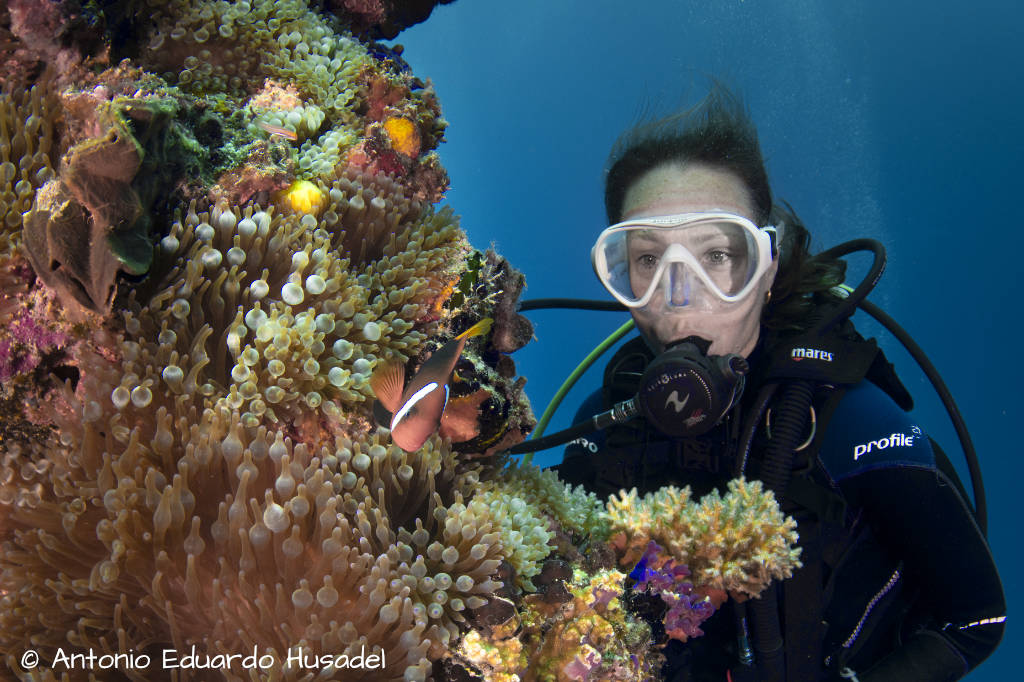